Postoperative acute kidney injury (AKI) is a known complication after cardiac surgery under cardiopulmonary bypass (CPB). The loss of pulsatility flow, kidney injury related to ischemia and reperfusion, haemolysis, inflammatory response activation, vascular redistribution and embolic phenomena are some of the factors involved in its appearance. Risk factors related to the patient (such as age and preoperative renal failure) increase the probability of the development of AKI. The prevalence of AKI after CPB ranges between 28 and 94% of patients. Between 1 and 10% of patients with AKI require renal replacement therapy (RRT)[1,2]. The diagnosis of AKI is related with increased morbidity and mortality in the short, medium and long term, longer hospital stay and increased costs and rates of hospital readmissions (even when serum creatinine levels returns to the normal range before discharge)[1,2].

Population ageing has led to an increasing number of valve surgery procedures among elderly patients. In this group, the morbidity due to postoperative AKI contributes to longer hospital stays and increased costs related to surgery[1,3]. We aim to analyse risk factors and predictors of postoperative AKI among patients undergoing cardiac valve surgery at our centre. We also intend to identify the most prevalent risk factors among elderly subjects and the preventive measures accessible in this age group.

The study protocol (identification number PI 17-649, CINV 17-03) received full approval from the local Institutional Research Review Committee and the Clinical Research Ethics Committee. It complies with the ethical guidelines of the Declaration of Helsinki. Informed consent was obtained from each patient. We analysed the influence of different independent risk factors (prospectively collected between 2013 and 2018) on postoperative AKI in a group of 939 consecutive patients undergoing isolated heart valve surgery under CPB. No patient was excluded or lost during recruitment. The analysed variables were prospectively collected from our clinical database.

Patients who met any of the RIFLE classification criteria[4]were diagnosed as AKI. Mortality was defined as 30-day in-hospital mortality after surgery. Urgent surgery was performed during the first 24 hours after surgical indication. Preoperative renal failure was considered according to the EuroSCORE II criteria[5]. The diagnosis of chronic obstructive pulmonary disease (COPD) required bronchodilator treatment. The preoperative values of creatinine corresponded to those obtained 48 hours before surgery, except in cases of urgency in which creatinine levels considered correspond to the day of surgery. The estimated glomerular filtration rate (eGFR) was obtained by applying the Cockcroft-Gault formula. Preoperative and intraoperative variables considered are detailed in Table 1.

Statistical analysis was performed using SPSS software version 22.0. Quantitative variables were expressed as mean ± standard deviation or as median, for asymmetric distributions. The Kolmogorov-Smirnov test was used to determine the normal distribution of each variable. Qualitative variables were expressed as absolute values and percentages. Association between variables was identified by the χ2 or Fisher’s exact test when qualitative and by Student’s t-test or Mann Whitney U-test when quantitative. Association between risk factors and postoperative AKI in the univariate analysis (P<0.2) was entered stepwise into multivariate logistic models. A P value <0.05 was considered significant.

Table 2 - Risk factors in patients with and without AKI after heart valve surgery. 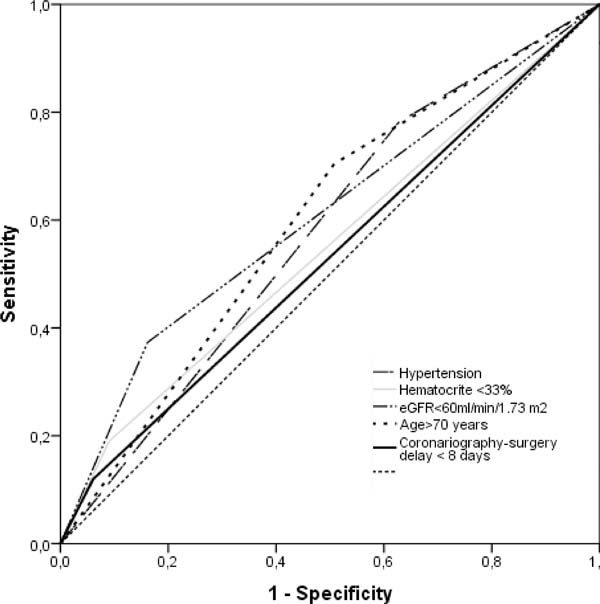 Preoperative identification of AKI risk factors in elderly patients after cardiac surgery would allow the opportunity to correct the surgical risk quantification as well as the implementation of preventive measures. In addition, it should help the Heart Team to choose the most appropriate therapeutic strategy. The interest of preoperative identification of AKI risk factors increases when age-related physiological derangement associated other co-morbidities. Up to now, the validated risk scores referred only to the prediction of postoperative RRT[6], although less severe kidney injury is known to be associated with higher long-term mortality[7-9]. Most studies are mainly focused on patients undergoing CABG[1,2]or mixed different diseases[7]and few evaluated the risk of AKI after valve surgery procedures[10,11], one of the most frequent among elderly patients.

According to several studies, the prevalence of postoperative AKI ranges between 28 and 94% and between 1 and 10% of patients require RRT[1-3]. Variability in the prevalence of AKI may be due to different evaluation methods: RIFLE[6](Risk, Injury, Failure, Loss, End-stage kidney disease) KDIGO[12] (Kidney Disease: Improving Global Outcomes) AKIN[13](Acute Kidney Injury Network) or ACEF score (Age, Creatinine and Ejection Fraction)[14] are the most frequently used criteria. Among our patients, AKI was diagnosed within the first 7 days after surgery, according to the RIFLE criteria. Quantification of renal function by means of diuresis volume was not considered in our study, as postoperative fluid management and diuretic treatment could affect it[7].

The prevalence of AKI in our population (around 20%) was comparable to other samples, in which postoperative mortality increases 1.5 to 5 times, and up to 10 times when RRT was required[1,2,15,16]. The observed mortality increased 2 times in case of AKI and 14 times when RRT was required. The AKI impact on ICU and hospital stays (increased 2 days in the first case and almost 2 times in the second) is similar to that previously published by other groups[1,2]. Age over than 70 years was an independent risk factor. In this group, mortality was significantly higher when AKI was present (11.2% vs. 6.8%) (P=0.025) and reached 75% of patients submitted to RRT. Among octogenarians, the mortality increased 2 times and reached 100% in the RRT group[10].

Variations in normal glomerular filtration rate (GFR) are related to age, sex and body mass index, ranging from 90-140 ml/min/1.73 m2 in healthy young adults. Among elderly patients, small increases in serum creatinine correspond to a greater GRF rate disruption than in younger ones[17]. The rate of physiological reduction of GRF is 0.7-1 ml/min/1.73 m2/year from 40 years old[18]and rises to 1.05 ml/min/1.73 m2 yearly in patients older than 70 years old[19]. When GFR ranges between 60-89 ml/min/1.73 m2 without kidney damage (absence of proteinuria, normal sediment and kidney image), individuals are classified as decreased GFR (a common situation in elderly), and no specific treatment is advised[12]. In the analysed population, relationship between eGFR and age was similar to that described in EUROCAP study (2007), in which an evaluation by general practitioners in a Spanish population showed that 25% of individuals over 65 years old had a GFR <90 ml/min/1.73 m2[20].

Although the reduction of preoperative eGFR has been identified as a risk factor for postoperative AKI, the cut-off point proposed for patients aged over 70 years is 10 ml/min/1.73 m2, higher than the cut-off point for the total population and younger adults[8]. Therefore, we can suppose that subclinical forms of kidney dysfunction act as AKI predictors after valve surgery in the elderly.

Few methods for measuring GFR are properly adjusted to be representative over 70 years of age. The eGFR calculation according to Cockcroft-Gault equation over-estimates renal failure in this group, due to the high weight of age. In addition, the Cockcroft-Gault equation has not been reformulated for serum creatinine values obtained by the current procedures (which are 10 to 20% higher than the classic one). All of this leads to eGFR overestimation. Some authors advise the use of more sensitive and specific formulas for AKI screening in the elderly, as haematocrit, blood urea and gender (HUGE) formula, which considers the influence of haematocrit, urea and gender as risk factors[21]. According to these findings, we found that, in patients older than 70 years, gender and preoperative anaemia have a greater impact on postoperative AKI manifestation (significantly more often when preoperative haematocrit <36% vs. 33% in the general population). In conclusion, eGFR is an adequate predictor of AKI after valve surgery in our elderly population, even admitting that Cockcroft-Gault equation could not be the most appropriate method for its quantification. Probably the HUGE formula will be more sensitive and specific in these patients.

Recent contrast administration and AKI are significantly associated[22]. In our elderly patients, contrast-induced nephropathy is enhanced by the frequent association of preoperative anaemia and ACE-inhibitors therapy, as well as CPB time. In patients with preoperative GFR <70 ml/min/1.73 m2 (classified as decreased GFR), an interval of at least 8 days should be recommended between the intravenous contrast administration and surgery. Despite the proposed nephroprotective effect of ACE inhibitors, their association with dehydration and diuretic treatment are a common trigger of AKI among the elderly. AKI secondary to overdose of ACE inhibitors is more common after therapy with longer-acting ACE inhibitors, such as enalapril[23].

The WHO (World Health Organization) fixed the lower limit of Hb at 13 g/dL in men and 12 g/dl in women to diagnose anaemia. Preoperative anaemia is a risk factor for AKI in all patients but is more powerful in those older than 70 years. During surgery, kidney injury occurs by association of hypoxia (secondary to haemodilution), release of iron and proinflammatory agents. Transfusion requirements and free plasma haemoglobin cause a decrease in haptoglobin, making unable the free radicals neutralization[14]. Consequently, in all patients, but especially in those older than 70 years, preoperative anaemia correction techniques (B12 or iron supplementation, growth factors etc.) are mandatory even in mild cases in which red blood cells transfusion is not recommended. Complementary techniques, such as autotransfusion and mini-CPB circuits, might also reduce haemodilution in this case. The haematocrit values during CPB should be greater than 20%, avoiding fluid overload. Intravenous mannitol infusion or intraoperative ultrafiltration can prevent this complication[14].

CPB duration is an independent risk factor for AKI in elderly patients. Interventions that reduce or avoid its use should decrease the prevalence of renal damage. Although the techniques for percutaneous mitral valve replacement are not yet perfectly developed, there are two alternatives to conventional treatment of aortic valve disease (one of the most prevalent diseases in the elderly). Transcatheter aortic valve implantation (TAVI) seems to be associated with lower AKI (between 8.3 and 26% vs. 43.7%) and RRT risk (2-3% vs. 7.6%) regarding to surgery and reduce the need for transfusion[24]. However, some authors have identified a risk of 57% or even higher when transapical technique is used. In addition, the administration of more than 99 ml of intravenous contrast during procedure significantly increases the risk of AKI[11]. Although the results of mortality and AKI prevalence are favourable in patients at high surgical risk, in low-risk patients (EuroSCORE II: 4%) it is associated with increased mortality in 3 years and increased perioperative risk of stroke, need for permanent pacemaker, paravalvular aortic regurgitation, vascular injury and cardiac tamponade[25]. Therefore, its use would not be recommended, even in the elderly. In this case, sutureless aortic valve replacement could be an alternative therapy. Its use is associated to a significant reduction on CPB time, less surgical morbidity (due to associated mini-incision techniques), bleeding reduction, and decreased AKI prevalence (estimated at about 3% of cases)[26]. Particularly in older or oldest-old patients, sutureless valve would avoid problems associated with TAVI implantation, which contributed to a significant decrease in medium-term survival.

Although this is a prospective, consecutive and observational study of a homogeneous population, Cockcroft-Gault equation may not be the most appropriate way to measure eGFR among elderly population, as age is over-considered in its calculation.

Although the kidney profile is very similar between the population analysed and the Spanish general population, the results could not be extrapolated outside our borders.

In this group of patients, the individual patient co-morbidities, estimated surgical risk and AKI risk factors should determine surgical decision-making and adequacy of new therapies that could prevent or reduce the CPB use.

No financial support.
No conflict of interest.

YC Substantial contributions to the conception or design of the work; or the acquisition, analysis or interpretation of data for the work; drafting the work or revising it critically for important intellectual content; final approval of the version to be published

GL Drafting the work or revising it critically for important intellectual content;; final approval of the version to be published

MB Substantial contributions to the conception or design of the work; or the acquisition, analysis or interpretation of data for the work; final approval of the version to be published

LP Substantial contributions to the conception or design of the work; or the acquisition, analysis or interpretation of data for the work; final approval of the version to be published

BS Substantial contributions to the conception or design of the work; or the acquisition, analysis or interpretation of data for the work; final approval of the version to be published

All scientific articles published at rbccv.org are licensed under a Creative Commons license